When talking to friends, family, and other acquaintances, as soon as the subject of weight loss comes up — which, I must say, happens almost daily in my life — I’m usually faced with the following confessions:

“My jeans are tight.”

“I haven’t been to the gym in weeks.”

“I work late and don’t have time to cook.”

“I finish the food off my kids’ plates.”

“I’m too tired to exercise.”

“I feel sluggish all the time.”

The conversation almost always ends the exact same way. After outlining the many causes of the extra pounds they’re carrying, the person will eventually mutter the phrase:

“I really have to do something about my weight.”

And that’s when I’m gripped with the overwhelming urge to reach out, shake their shoulders, and say:

But, instead, I offer them an understanding nod and change the subject. Because I know that beyond offering a few general tips and pointers about how to lose weight — you know, like eat less and move more — there’s absolutely nothing I can do to help them.

“Then just lose some weight.”

You know why? Well, for starters, that’s a surefire way to lose friends. But it’s also because I know from firsthand experience that nothing I can say or do can force someone else to take that first step on the path to a healthier lifestyle. None of the dozens of doctors, nutritionists, or physiologists I visited throughout my childhood and adolescence could make me lose weight, and even my parents’ and grandparents’ desperate pleas to stop eating everything in sight had no effect on me.

I gained over 100 pounds in five years, and it wasn’t until I woke up one morning and decided that I had to do something RIGHT NOW that I managed to take my first step: joining Weight Watchers.

You have to make the decision to change your life, and then you just have to take that first step. It’s that simple.

I know there are so many people who are desperate to reap the rewards of a healthier lifestyle, but they just can’t seem to figure out how to get started. For me, my “a-ha” moment occurred when I stepped on a scale and was slapped in the face by the cold, hard fact that I was well on my way to being 300 pounds. Other people begin their weight loss journey because they’re trying to get pregnant, or because they already have children who are starting to adopt poor eating habits. Some women do it to fit into their high school jeans or look svelte for an upcoming vacation or reunion, while others are motivated by a desire for more energy and fewer doctor’s appointments.

Whatever their motivation, when someone confides how miserable they’re feeling about their current weight, and talks about needing to do “something,” what I’d like to suggest is doing just ONE something. The first step will be enough to get you started, and it’ll make that next “something” so much easier.

Maybe that means trying to drink less soda and more water one week, then swapping one not-so-healthy snack per day with a banana or an apple the following week, and then gradually cutting back on microwave dinners and Chinese take-out. I recently advised a self-proclaimed “chocoholic” to limit her consumption to once or twice a week, and to swap Snickers bars for small portions of antioxidant-rich dark chocolate. I urged someone else to stop thinking she had to eat nothing but salads and grilled chicken to lose weight — instead, I told her to make healthier choices most of the time, and enjoy her favorite indulgences in moderation.

It sounds like a no-brainer, but the truth is that when it comes to beginning your weight loss journey, it really doesn’t have to be complicated. You make the decision to lose weight, you possibly set a goal (lose 40 pounds, wear a size 8), and from that point on, it’s all about baby steps. Take it one day at a time, and make the small changes that will help you uphold that commitment to yourself and ultimately reach your goal.

Now, tell me — what was the “first step” on your personal weight loss journey?

(Also, please consider subscribing to my blog! The link is on the homepage. Thank you!)

Okay, so beyond my genuine promises to spend more time writing on this blog (and to update that two-year-old banner photo of myself once and for all), I’ve assembled a list of ambitious — yet, I think, still realistic — health and fitness goals for this year.

I recently posted a blog for CafeMom on this very topic, and I decided to heed my own advice when it comes to not declaring any more vague “lose weight” resolutions and calling it a year. I’ve been stuck at my current weight and my current fitness level for far too long, and now that Weight Watchers has rolled out it’s new PointsPlus program (more on that next time!), I’m determined to make this the year I finish what I started. It’s time to get to my goal weight, and tackle the following list of lofty health-related New Year’s Resolutions: 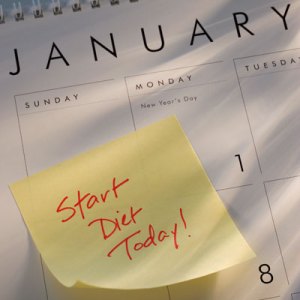 1.) Run a 5K. And I do mean “run.” This year I will prove to myself that somewhere deep down inside of me lies a real live runner who is more than capable of eking out 3.1 measly miles. I run almost every day — with the intention to burn calories and earn Activity POINTS, of course — but now I need to start making measurable time and distance goals…because I still have a hard time seeing myself as anything more than a fat girl in jogging tights. I have a feeling that the more I impress myself with my ability to run faster and farther, the more I’ll be motivated to improve — and, with any luck, I’ll finally develop the confidence I need to compete in a group race.

2.) Stop Binge Eating. I can almost guarantee that I routinely undo a week of hard work over the weekend, all thanks to my “I just weighed in this morning so now it’s time to gorge myself on pancakes, Chinese food, and Frappuccinos” attitude on Sundays. As much fun as it is to grant myself that one “cheat” day each week — for lack of a better term — I’m not doing myself any favors, and it has to stop. But instead of trying to quit my binge eating habit cold turkey (which clearly hasn’t worked for me yet), I’ll try planning for just one indulgence on Sundays: that way, I still get my “treat,” but I won’t completely ruin my progress that week and risk giving in to one of my oldest, most dangerous eating habits.

3.) Find New Workouts. A good friend of mine was kind enough to grant me a gift certificate for a month of kickboxing at my hometown karate studio for Christmas. I fully intend on using it for the Muy Thai kickboxing classes I tried a couple weeks ago. It’s an incredible workout, and what could possibly be more fun than releasing all that pent up frustration by punching the crap out of things? Just kidding. (Maybe). In other news, the YMCA I work for just opened a brand new, state-of-the-art wellness center and gym. It’s a huge facility, and I foresee spending lots of time testing out new equipment and getting back into spinning, yoga, step aerobics, and other classes I used to take when I first started losing weight.

4.) Learn to Cook. No more relying on the microwave as my predominant cooking tool. The new Weight Watchers program frowns upon anything that comes in a bag, box, or can (carbs are now calculated for POINTS values, and we’re supposed to keep tabs on sodium). If I truly intend to commit to my healthy lifestyle for the long run, I can no longer rely on convenience foods — or, as is more often the case, getting someone else to cook for me. I’m a fairly intelligent person, I would say, so there’s absolutely no excuse not to invest in a few basic healthy cookbooks, or spend some time scouring weightwatchers.com for recipes, and teach myself some easy recipes and healthy cooking techniques. I know it’s what I need to do to jumpstart my weight loss again — and, more importantly, learn how to sustain my healthy habits for life.

5.) Be a Leader. A Weight Watchers leader, that is. I have a burning desire to help others take that first step on the road to weight loss. I can’t even begin to express my gratitude for the Weight Watchers leaders and members who encouraged and pushed and inspired me along the way. I know there are so many people who feel the way I used to: completely hopeless and “destined” to be overweight and miserable. But I’m living proof that it can be done — and I want to do my part to help others realize that. Plus, I think Weight Watchers rocks.

So, what are some of your health and wellness resolutions for 2011? Please share!

Jennifer L. Nelson lost 90 pounds...and kept them off. In her efforts to lose "the final 40," she became a fledgling runner and martial artist (Taekwondo and Muay Thai). A NJ-based freelance journalist, when she's not writing about the latest health and fitness trends, she's actually living them. Visit her website at www.jenniferlnelson.com.